History
Antonino Farruggio, Nino for all, was born in Catania in 1945, the war just ended, and Sicily was poor with pride, but still poor. Catania a city on the east cost of Sicily, was bombed, and life wasn’t easy.

Fortunately his father survived during the war in the infantry as a soldier, and when back they got a house from the Italian state.

Where Nino lived with his 6 brothers and sister. In order to help the family he started very young practising in local artisan shop where I learned the secrets of melting copper, silver and lately gold.

This was to pay his fees for the “Nautico” the Civil Navy college in Catania.

He loved his first 3 years at the college, but the afternoon work he was doing fascinate him much more.

And he started thinking and creating jewellery in silver, and get in love with the goldsmith hand capability knowledge.

So he decide to drop the “Nautico” , and moved to the north of Italy, to attend the most famous school in Jewellery creation, the Benvenuto Cellini college, where he got a diploma in “Cesello e Sbalzo” in the meanwhile as usual working as a Goldsmith.

Practising in the numerous gold art-shop existing in Valenza Po, that at the time was named the “gold city” .

Where the Italians become famous for their Jewellery creation in all the world, still many famous name comes from there.

After one year he was working full time as one of the best young goldsmith in town. He decided then to move back in Sicily, he’s lost love, and open a shop in is native city.

And this is why we are here, the goldsmith shop his now on the hands of his son Luca that with Emilio a goldsmith and 3D designer partner, are trying to bring ahead the artisan goldsmith shop and the history that live with it.

Of course time changed from the hand work, that still remain a must really visible in the creation of the Farruggio Jeweller Design and Making crew, to the rapid prototyping laser machine and 3D prototyping jewellery.

Nino received many awards in the course of his career , from the 1992 in New York where he is awarded as one of the best Italian jewellery designer and have stand for the fair “ The Italian Art of Living” for the Colombus Day, to the latest one in 2015 as one of the best artisan and goldsmith in Italy, by “Milano Art Craft Fair”. 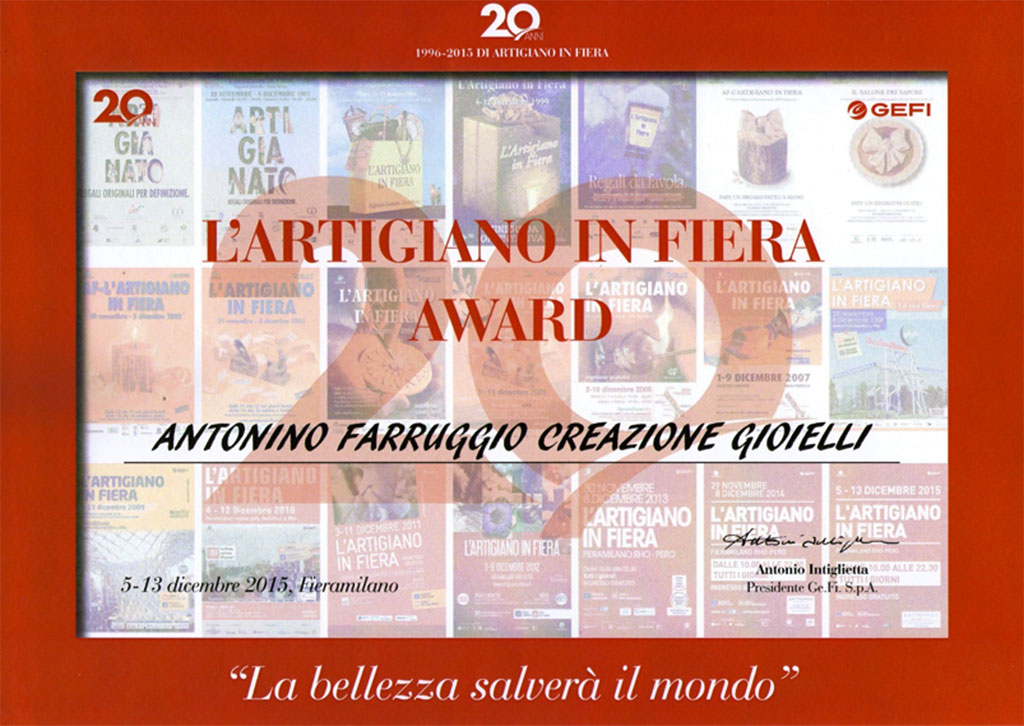